Bangladesh, Bhutan and India are connected through the transboundary Ganges and Brahmaputra Rivers. The Protocol on Inland Water Transit and Trade (PIWTT) between India and Bangladesh designates specific river routes for the movement of intercountry and transit cargo. It takes approximately 7 to 10 days for a consignment from Bhutan to reach Narayanganj, Bangladesh via land transit routes in India. Delays are caused by inadequate road infrastructure, customs procedures, internal disturbances at border points and trans-shipment at the Bangladeshi border. These delays cost time and money. For a landlocked country like Bhutan, access to sea routes through the seaports of Bangladesh would extend its trade prospects; however, rising logistics costs have limited its scope. As a result, Bhutan would benefit greatly from transit trade with Bangladesh via the transboundary Brahmaputra River with modal shifts from road to waterway and then road to sea.

The initiative involved a literature review, secondary data analysis from available sources and extensive fieldwork in Assam and Meghalaya, in India, and Chilmari, in Bangladesh, and selected adjoining areas. The fieldwork included interviews with stakeholders, particularly traders, boatmen, customs officials and transporters, as well as representatives from the Border Security Force in India and the Border Guard in Bangladesh. There were also consultations with women, representatives from non-government organizations and government officials in trade and agriculture. In total, the Consumer Unity & Trust Society (CUTS) team interacted with approximately 100 stakeholders in order to better understand trade prospects, the supply and demand of goods, and barriers to the cross-border trade and transit of select products through inland waterways. One of the key recommendations of this explorative study was to operationalize shallow draft vessels to facilitate trade in shorter stretches of inland waterways near the international border.

To generate evidence in support of this recommendation, a case study was conducted for the stretch between Dhubri (Assam, India) and Chilmari (Kurigram, Bangladesh) along the Brahmaputra River. Close to the India-Bhutan border, the inland waterways in Dhubri can be easily accessed from Bhutan by road. As a land-locked country, Bhutan conducts trade with Bangladesh primarily via land routes through India. Minerals, boulders, stones and fruits (mainly apples and oranges) are in great demand in Bangladesh. Inadequate road infrastructure and procedural delays at border checkpoints add significantly to logistics costs and time. The freight cost per tonne-kilometre through inland waterways is much lower (1.06 rupees), compared to rail (1.41 rupees) and roadways (2.58 rupees). For example, a 200-tonne vessel could replace 20 trucks with a 10-tonne capacity and reduce fuel expenses, thereby cutting carbon emissions.

As a result of the advocacy efforts of CUTS, Dhubri and Chilmari were declared ports of call along the PIWTT Route between India and Bangladesh. On 18 July 2019, the first Indian cargo ship carrying 1,000 tonnes of stone aggregates from Bhutan arrived at Narayanganj, Bangladesh. The stones were brought by truck from Bhutan to Dhubri, where they were loaded into a vessel and carried to Narayanganj via waterways. The time needed to move the cargo has been reduced by eight days and travel costs decreased by 30 percent, thereby lowering the logistics costs.

This trilateral, transboundary cooperation between Bangladesh, Bhutan and India has opened new avenues for cross-border and transit trade. Several small traders in India and Bhutan have shown interest in switching to inland waterways for trade with Bangladesh.

CUTS has continued its effort to promote inclusive cross-border and transit trade as part of the regional programme of Transboundary Rivers of South Asia (TROSA), managed by Oxfam and supported by the Government of Sweden. With the introduction of shallow draft mechanized vessels in the PIWTT Routes, local traders and producer communities with market linkages across the border could also participate in international trade.

The newly declared ports of call in Jogigopha, Dhubri and Chilmari will play a key role in multimodal trade and transit and will redefine the transport narrative of Bangladesh, Bhutan and India. Similar opportunities for cross-border trade along shorter stretches of transboundary waterways could be explored in other international rivers. With adequate infrastructure and regulatory support, cross-border trade via inland waterways could attract the private sector, business communities and local players as a sustainable, cheap and environmentally friendly mode of transportation.

The initiative’s concerted advocacy of micro-level issues involving local women, farmers and traders informed the macro-level policy changes to customs, trade and border management in these countries. Promising developments opened new avenues for further cross-border trade and movement of transit cargo on other inland waterway routes between Bangladesh, Bhutan and India. The initiative could therefore be replicated in other subregions in similar landscapes with transboundary rivers. 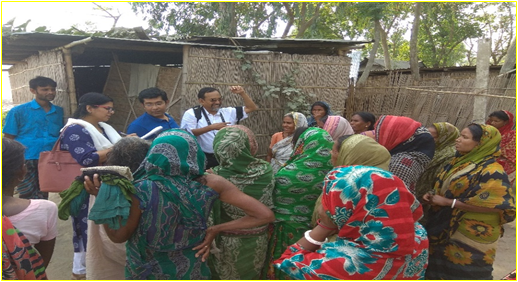