Many Afghan women who are involved in micro and small-scale enterprises face numerous challenges, such as a lack of access to finance, poor infrastructure and a lack of business networks.  In general, Afghan women are not expected to have an income or carry out business, which in many cases means that they are expected to be inactive. Major difficulties arise from social norms and cultural prejudice, particularly in the rural areas, due to customs and tradition.

While Afghan government policies tend to be gender-neutral, some issues are more pronounced for women. For example, Afghan women have less access to the market because their mobility is limited and they face language barriers. Afghan women are discriminated against in acquiring property or owning assets. Also, there are few inspiring role models of successful women entrepreneurs with similar backgrounds.

Initiated in a kick-off exchange in October 2018, the Ministry of Women’s Empowerment and Child Protection of Indonesia implemented a South-South and triangular cooperation initiative with the Deutsche Gesellschaft für Internationale Zusammenarbeit [Germany Development Cooperation Agency] (GIZ), in which Indonesia would share its best practices in empowering women through home industry with the Ministry of Women’s Affairs of Afghanistan. This cooperation aims to empower women in Afghanistan by learning from Indonesia’s experience in promoting the economy of less prosperous women in rural areas and in conditions of conservative patriarchal societies.

To this end, the initiative aims to strengthen partnerships between Indonesia and Afghanistan through direct exchanges to identify best practices for the economic empowerment of women through home industry. This was followed by facilitating joint efforts to develop “A Concept for the Economic Empowerment of Women in conditions of Conservative Patriarchal Societies”, mutually agreed by Indonesia and Afghanistan for possible replication in Afghanistan. In its role as facilitating partner, GIZ ensured quality, partnership and sustainability throughout the process.

Through evidence based on a multistakeholder partnership, Indonesia and Afghanistan have achieved outcomes at many different levels (personnel, community, institutional). Examples include direct knowledge exchanges between sub-national officials of Indonesia and Afghanistan where the best practices for women in home industry were identified, and up to 200 diverse stakeholders were involved. These included individuals from national and sub-national government, national and local civil sociey organizations (CSOs), women’s community groups, religious leaders and business practitioners during the key processes.

The project has a strong participatory approach throughout each stage of its implementation. Afghanistan’s national and sub-national officials are not simply passive beneficiaries, but rather active partners. They make key contributions towards achieving results, especially in: consolidating the sharing of knowledge with Indonesia;  validating the concept of women’s economic empowerment in home industry within Afghan culture and norms; and presenting the one concept learned from Indonesia to potential donors in Afghanistan for possible piloting.

In Indonesia, this triangular cooperation initiative has shaped the capacity of the Ministry of Women’s Empowerment and Child Protection to innovate the approaches to home industry development. In the tenth month of this triangular partnership, Indonesia was successful in drawing on lessons learned and in jointly creating the module, ‘Steps to Develop Home-Based Industry’ as a reflection of its experiences in women’s economic empowerment within the project framework. The Module has been shared and accepted by the Ministry of Women’s Affairs, Afghanistan for reference in implementing the lessons learned from Indonesia in Afghanistan.

In less than a year, the project has translated the exchange into concrete partnership action. To date, reflecting the lessons learned from Indonesia, led by the Deputy Ministry of Women’s Affairs of Afghanistan, there has been a series of concrete actions on women’s economic empowerment in Afghanistan: first, exercising/piloting the ‘one concept’ of home industry, learned in Indonesia, in Samangon Province; second, establishing a packaging centre for women in Hazrat Sultan District; and third, presenting the lessons learned from Indonesia for funding possibilities and scaling up in Afghanistan.

In Indonesia, the partners are women and individuals practising home industry and e-commerce, community and religious leaders, the Association of Women in Small Micro Business Assistance (ASPPUK), the ‘Female-Headed Household Empowerment Programme’, the Ministry of State Secretariat and the National Coordination Team on South-South Cooperation (NCT-SSC) which consists of four line Ministries for Foreign Affairs,  State Secretary, National Development Planning/Bappenas and Finance. 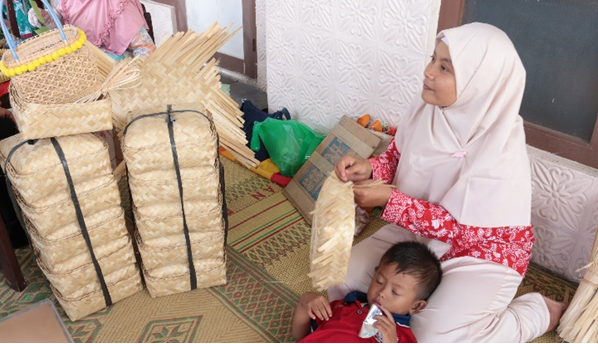 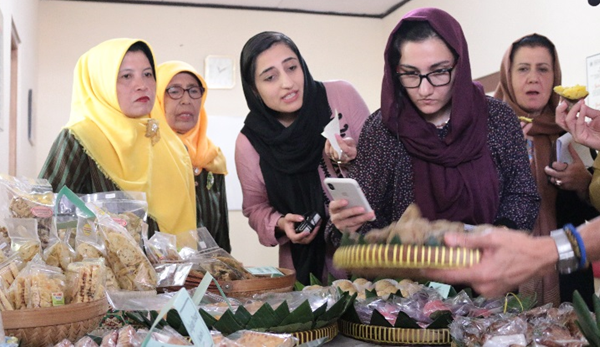 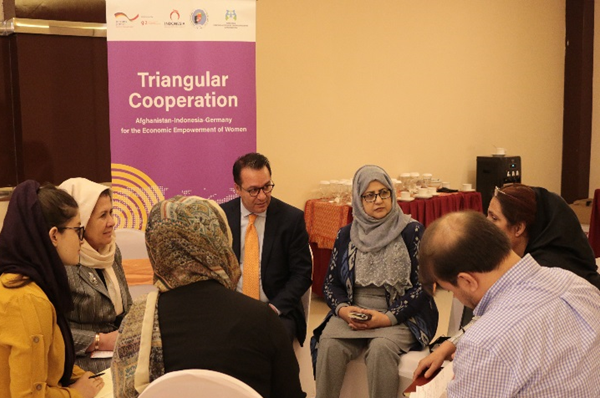 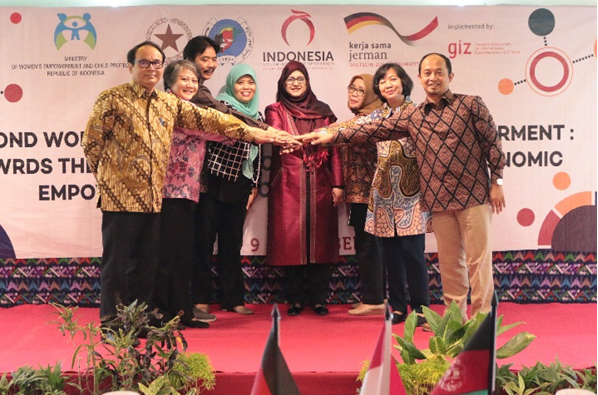